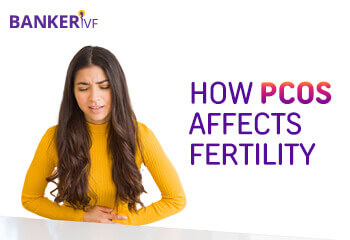 Polycystic ovary syndrome (PCOS) is a medical condition that affects one out of every ten women of childbearing age. Women with PCOS have hormonal imbalances and metabolic issues, which can have an impact on their general health and appearance. Infertility can also be caused by PCOS, which is a common and curable condition.

Polycystic ovary syndrome (PCOS) is one of the most prevalent causes of infertility in women. It’s a hormonal issue that wreaks havoc on the reproductive system. If you have PCOS, your ovaries are bigger than average. These larger ovaries may contain a large number of small cysts containing immature eggs.

The Causes of PCOS:

Experts are unsure what causes PCOS, although hereditary factors may be involved. If a woman’s mother or sibling has the condition, she is more likely to get it than others.

Excess insulin in the body, in addition to a hereditary link, increases a woman’s chance of having PCOS. Insulin is a hormone produced by the pancreas that the body utilizes to convert sugar in meals into energy.

Symptoms might appear at any age or stage of a person’s reproductive life. These symptoms can change from time to time as well.

Some of the most common PCOS symptoms are as follows:

How Does PCOS Affect Fertility?

Women with PCOS, on average, take longer to conceive than other women. This might be due to irregular menstruation, which indicates they do not ovulate every month. Additionally, being overweight lowers fertility and might make it more difficult for women with PCOS to conceive. The good news is that women with PCOS can have as many children as other women throughout their lives.

In most cases, difficulties in ovulation are the root cause of infertility in women with PCOS. Ovulation may well not happen resulting in an increase in testosterone production or just because follicles on the ovaries do not develop.

Even if ovulation occurs, a hormonal imbalance may prevent the uterine lining from fully growing to allow for implantation of the mature egg.

Fertility treatments for women with PCOS

Because there is presently no cure for PCOS, treatment and care must be personalized to the patient’s specific needs. Depending on the major difficulty you are facing, you have a variety of alternatives.

PCOS does not restrict you from becoming pregnant. PCOS is one of the most prevalent yet curable reasons for female infertility. The hormonal imbalance that occurs in women with PCOS prevents the ovaries from producing and releasing eggs (ovulation). You cannot become pregnant if you do not ovulate.

Your doctor can advise you on methods to help you ovulate and increase your chances of getting pregnant. Get in touch with Dr. Banker today if you have been diagnosed with PCOS and want to get it under control. He can also advise on all your other options if you are having difficulty conceiving.

How Thinking Positively Helps You with IVF Treatment

Assisted Reproductive Technology (ART) – All You Need to Know

How Thinking Positively Helps You with IVF Treatment

Infertility is a common issue among couples trying to conceive. It is seen widely in India too. Luckily, with the rapid advancement in technology several effective and non-invasive treatment options are now available.

Having a child of their own is every parent’s dream. With the stress and load in one’s lifestyle, it has become quite difficult to conceive these days. For a few years now, women have been experiencing issues with conceiving quite efficiently.

Assisted Reproductive Technology (ART) – All You Need to Know

Infertility is a massive issue around the world, alone in India around 27.5 million couples suffer from Infertility. It is not just a physical ailment but rather emotional, cognitive, and societal too. Numerous factors are responsible for infertility in women and men.

Book an appointment Call Us